Step Therapy: Everything you need to know about “fail first” insurance policy

Step therapy prevents patients from accessing treatments prescribed by their doctor, and instead mandates a course of treatment mandated by their insurance carrier. 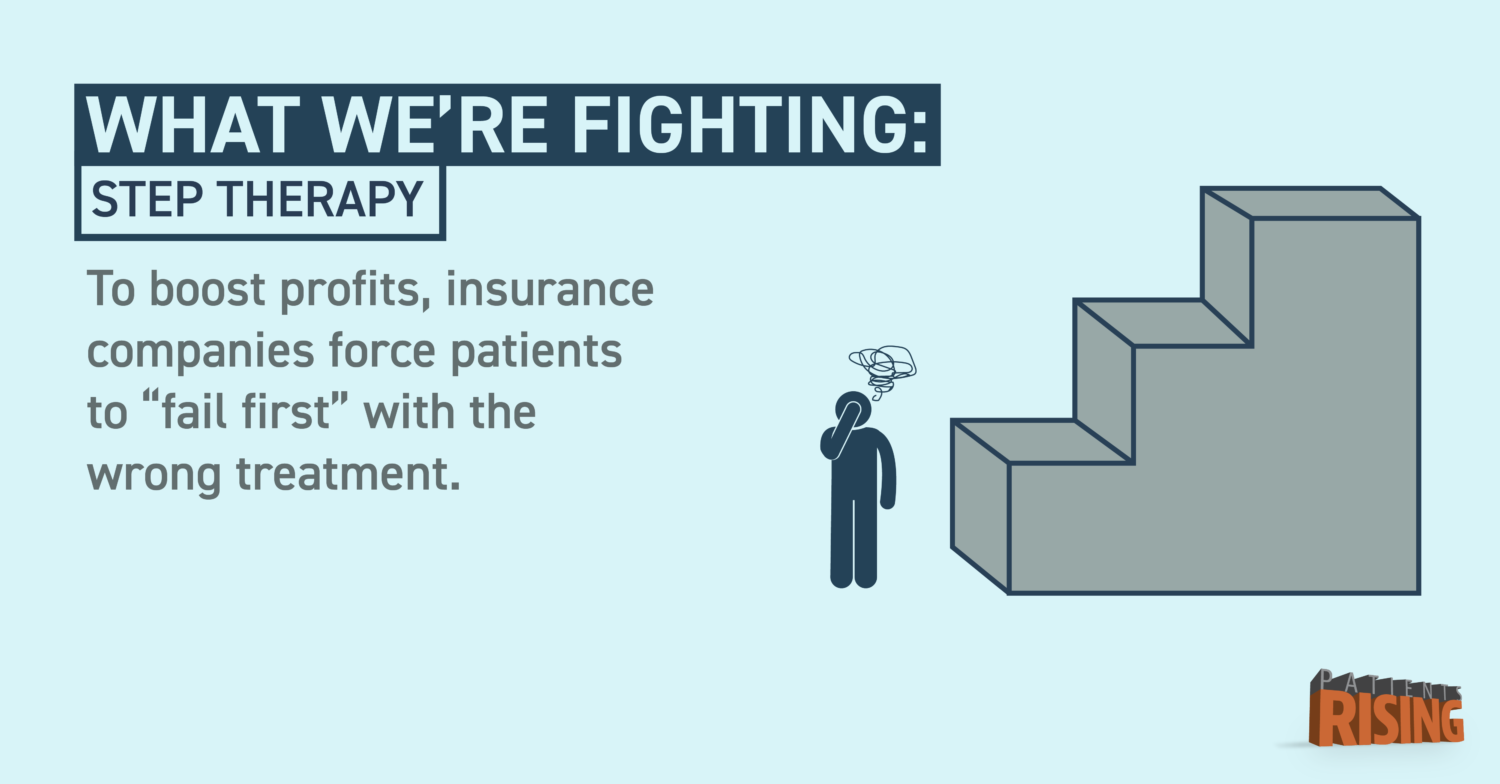 What is step therapy?

Step therapy prevents patients from accessing treatments prescribed by their doctor, and instead mandates a course of treatment mandated by their insurance carrier. Patients start with older, cheaper treatments, and if they are not effective, patients “step” to another treatment.

Some patients suffer terribly during this process, becoming sicker when denied prescribed treatments. For this reason, it becomes abundantly clear why patients across the country have another description for step therapy: “fail first.”

“When a patient has to fail first on a drug before being allowed to take the medication originally prescribed, the patient, physician and public health suffers,” explains FailFirstHurts.org. “This practice can result in serious negative consequences for consumers and the public health system. By limiting the medication options, both doctors and patients are forced to compromise their treatment decisions in a way that is dangerous, time consuming and more expensive in the long-term.”

From our perspective, step therapy hurts patients by restricting access to the right treatment.

“Oncologists also say step therapy often doesn’t take into account a patient’s full medical history. Although that may not always be decisive, you don’t need a medical degree to realize the obvious risks.”

Earlier this year, our national Patients Rising survey, which was conducted in partnership with CancerConnect, found health plans routinely deny claims, drop drugs from the formulary after the plan-year has begun, and employ practices such as step therapy or “fail first” to force patients to take less effective treatments despite the best advice from their physicians. 77% believe that “step therapy” or “fail first” causes cancer patients to take potentially ineffective treatments instead of the therapy prescribed by the oncologist.

As Becker’s Hospital Review points out, insurance companies have been able to increase their profits by denying patients access to the treatments prescribed by their doctors.

The Alliance for Patient Access has a helpful video that explains why step therapy is harmful to patients.

What are the ethical repercussions of policies that force patients to fail first?

“The patient’s being told to use a drug we know isn’t going to work, but we have to use it anyway for someone with terminal illness? To me that’s just insane, but it’s the way they do things,” says Dr. Kenneth B. Blankstein, an oncologist in Flemington, N.J. “It’s taken away clinical judgment. It’s managing by algorithms.”

In a recent piece published at the Chicago Tribune, Dr. Louis Philipson, an endocrinologist and the director of the Kovler Diabetes Center at the University of Chicago, argues that fail first policies contradict a provider’s obligation to patients.

“Health insurers too often require a patient to first try and fail on certain drugs, almost always older and less costly, before providing coverage for other medications – a process known to the insurers as “step therapy,” he contends. “My staff and I spend far too much time jumping through baseless hoops, trying to get prescriptions approved; it takes us away from actually caring for patients. It’s also frustrating to watch patients suffer needlessly as one medication after another fails them. Patient safety is being compromised in the name of cost containment.”

Dr. Philipson is optimistic that things will soon change with the passage of the Illinois Managed Care Act-Step Therapy, which will help thousands of patients “by increasing access to the most effective treatments and curbing the process of step therapy.”

There’s a growing effort to stop insurance companies from using step therapy as a cost-cutting measure. A dozen states have existing laws that place limits on step therapy. Stat News reports that at least five states are looking to join that effort by advancing legislation to restrict step therapy.

New York is one state where legislation is currently pending. Patients and health care providers recently organized an event in Albany to urge Gov. Andrew Cuomo to sign a “step therapy” reform bill.

Sponsored by Assemblyman Matt Titone and Sen. Cathy Young, the legislation will help patient suffering from lupus, cancer, HIV/Aids, mental health, multiple sclerosis, and chronic pain by creating “an expedited process for patients and health care providers to attempt to override a step therapy system for treating patients. If the bill is signed into law, a determination would have to be made by health plans and insurance companies within 72 hours of the receipt of all information from the patient and doctor in emergency cases.”

“This practice has the potential to result in serious negative consequences for consumers and the public health system,” New York State Assembly Member Matthew Titone wrote back in 2012. “By limiting the array of medication options, both physicians and consumers are forced to compromise their treatment decisions in a way that is dangerous, time consuming and more expensive.”

Readers, this is a longer than usual article, but once you...