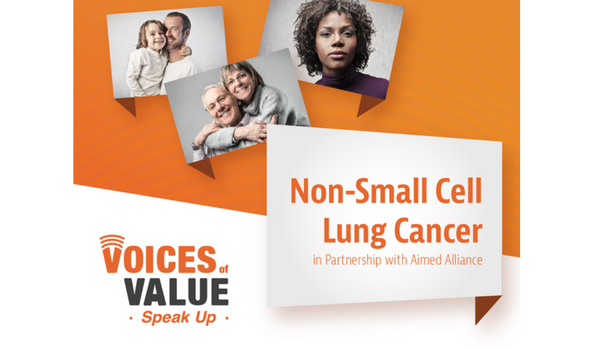 Join us today as we share Voices of Value St. Louis.

Voices of Value Speak Up: Non-Small Cell Lung Cancer is the first part of a national six-event program presented by Patients Rising and Aimed Alliance.

Our goal is simple: protect every patient’s right to access life-saving treatments.

If you are a cancer patient, caregiver or curious consumer — we invite you to join us for a free evening of dinner, drinks and value.

You’ll hear real patients speaking out on value and why it is important to answer institutions, specifically the Institute for Clinical and Economic Review (ICER), that are attempting to create roadblocks between patients and innovative treatments.

We believe that the true measure of value in our health care system starts with the concerns and goals of patients. Register for our event here.

The St. Louis Post-Dispatch offers a sneak preview of our Voices of Value St. Louis event.

In a column from our co-founder and policy director Jonathan Wilcox, the newspaper shares why patients from opposite coasts are meeting in the middle in St. Louis: To lend their urgent voices of value to the growing chorus of patients who, perhaps better than all of us, know a threat to survival when they see one.

Our Voices of Value St. Louis event precedes the Institute for Clinical and Economic Research’s major policy meeting on new ways to control health care costs. ICER is now taking aim at the medicines for one specific disease: Non-small-cell lung cancer, which affects more than 200,000 Americans every year.

As part of our ongoing partnership with A Woman’s Health Magazine, our co-founder and executive director Terry Wilcox debunks one of the myths surrounding lung cancer. Lisa Goldman was one patient who did not fit the profile for lung cancer. She never smoked, nor has she lived or worked near smokers.

“I’m something of a health nut,” she says. “I was teaching indoor cycling and fitness classes up until I became too sick to teach.”

In October 2013, Lisa went to the doctor because of a bad cough. A chest X-ray showed that her lungs were clear, and the doctor said that all she needed was some codeine cough syrup. She was 41. But the cough lingered. Two months later she returned to the doctor and was told she had “irritated airways.” But the healing never came.

Read Lisa’ story to learn why frameworks and clinical pathways endanger the health of patients. Only at A Woman’s Health Magazine.

Lung Cancer: 1 in 5 patients with lung cancer do...

Access to Treatment: 1 in 5 lung cancer patients get no...