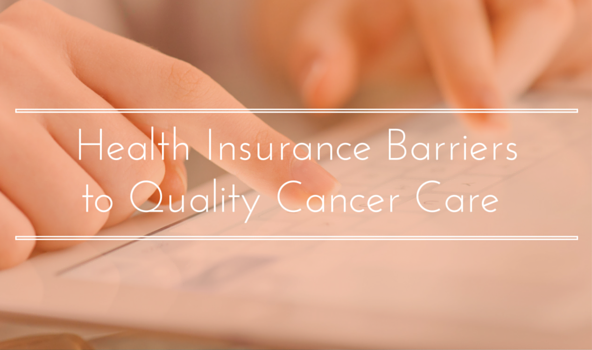 CHICAGO & WASHINGTON–(BUSINESS WIRE)— Patients Rising, in partnership with CancerConnect, released the findings from a new survey showing the extent to which insurance practices interfere with medical treatments of patients with cancer, despite rising costs of policies and higher deductibles. The national survey of patients with hard-to-treat cancers finds health plans routinely deny claims, drop drugs from the formulary after the plan-year has begun, and employ practices such as step-therapy or “fail first” to force patients to take less effective treatments despite the best advice from their physicians. At the same time, most patients (61%) report higher monthly premiums for their health coverage than a year ago, and a dramatic hike in their out-of-pocket payments. The findings of the survey were made public at a forum hosted by Patients Rising during the 2016 American Society of Clinical Oncology (ASCO) annual meeting in Chicago and timed to coincide with the 2016 international convention of the Biotechnology Innovation Organization (BIO) in San Francisco.

The survey is entitled Health Insurance Barriers to Quality Cancer Care: The Real Life Experiences of Patients Undergoing Treatment. It puts a human face on the struggles that leave many patients feeling overwhelmed by the steps required to get their health plan to pay for the therapeutics or the diagnostic tests they need. Half of all respondents (47%) and a greater majority (73%) of those aged 18-44 say that dealing with insurance problems is time-consuming and stressful and 61% agree that cancer patients who have trouble affording co-insurance payments will often take a different drug or no drug at all.

Jonathan Wilcox, Patients Rising policy director and co-founder stated, “This comprehensive survey shows that because of many insurance practices, too often patients don’t receive the type of care they pay for and deserve. The insurance industry needs to listen to these constructive complaints and improve the overall quality of its service.”

The survey was commissioned by CancerConnect, an online community for cancer patients, survivors and caregivers that regularly polls patients on their struggles and concerns. This survey involved over 400 insured patients, 18 and older, who are undergoing treatment for three hard-to-treat cancers: melanoma, multiple myeloma and non-small cell lung cancer.

Charles Weaver, MD, founder and executive editor of CancerConnect.com, a nationwide community of cancer patients, who conducted the poll added, “We see that a large majority of patients not only have negative experiences with insurance companies when it comes to the cost of and access to their treatment, but they experience unacceptable delays and unauthorized changes in their treatment when the insurance companies interfere with the doctor-patient relationship.”

Highlights of the poll regarding the cost of cancer treatment include:

Health insurance premiums for cancer patients are increasing. Among cancer patients between 18 and 44 years old, 91% have seen premium hikes over the past year, with 45% of them reporting increases of over $100 a month.

At the same time, a majority of cancer patients (54%) say their medical insurance deductible has risen over the past 5 years. The average deductible increase is $898, with 18-44-year-olds seeing an increase of $1,549.

Claim denials are a common occurrence. 57% of patients faced denied claims, and 27% of those aged 18-44 had 5-6 rejected claims.

Yet, 3 in 4 patients (74%) agree that most people don’t know how to appeal a claim denied by their insurance provider, and even when they try they will often end up confused and give up.

Highlights of the poll regarding patients’ concerns about access to new treatments:

86% of those surveyed want to have access to targeted therapies recently approved by the FDA called immunotherapies that free up the body’s immune system to recognize and destroy specific cancer cells.

83% say “Not getting to take the drug your doctor prescribed can mean taking a less effective treatment or one with more side effects,” and 35% of those surveyed say, “Many cancer patients are required by their insurance plan to take a different drug than the one their oncologist thought was best.”

77% believe that “step therapy” or “fail first” causes cancer patients to take potentially ineffective treatments instead of the therapy prescribed by the oncologist.

A majority of respondents, 52% say “prior authorization” is often reviewed by an insurance representative without medical training.

70% of cancer patients surveyed say that when they began cancer treatments that they did not know which therapies were included in their health plan’s formulary.

Dr. Weaver concludes, “”Cancer patients and their families deserve better. They deserve to be treated with dignity and respect.”

The CancerConnect survey was conducted by the Clarus Research Group of Washington, DC, between May 24 and 31, 2016. 418 cancer patients, all with health insurance, completed by poll online. The results were released in Chicago, concurrent with the ASCO Cancer Conference.