Ann's Stiff Person Syndrome could kill her in a terrible way. She could die, alone, frozen and unable to move/call for help. Here's what you need to know. 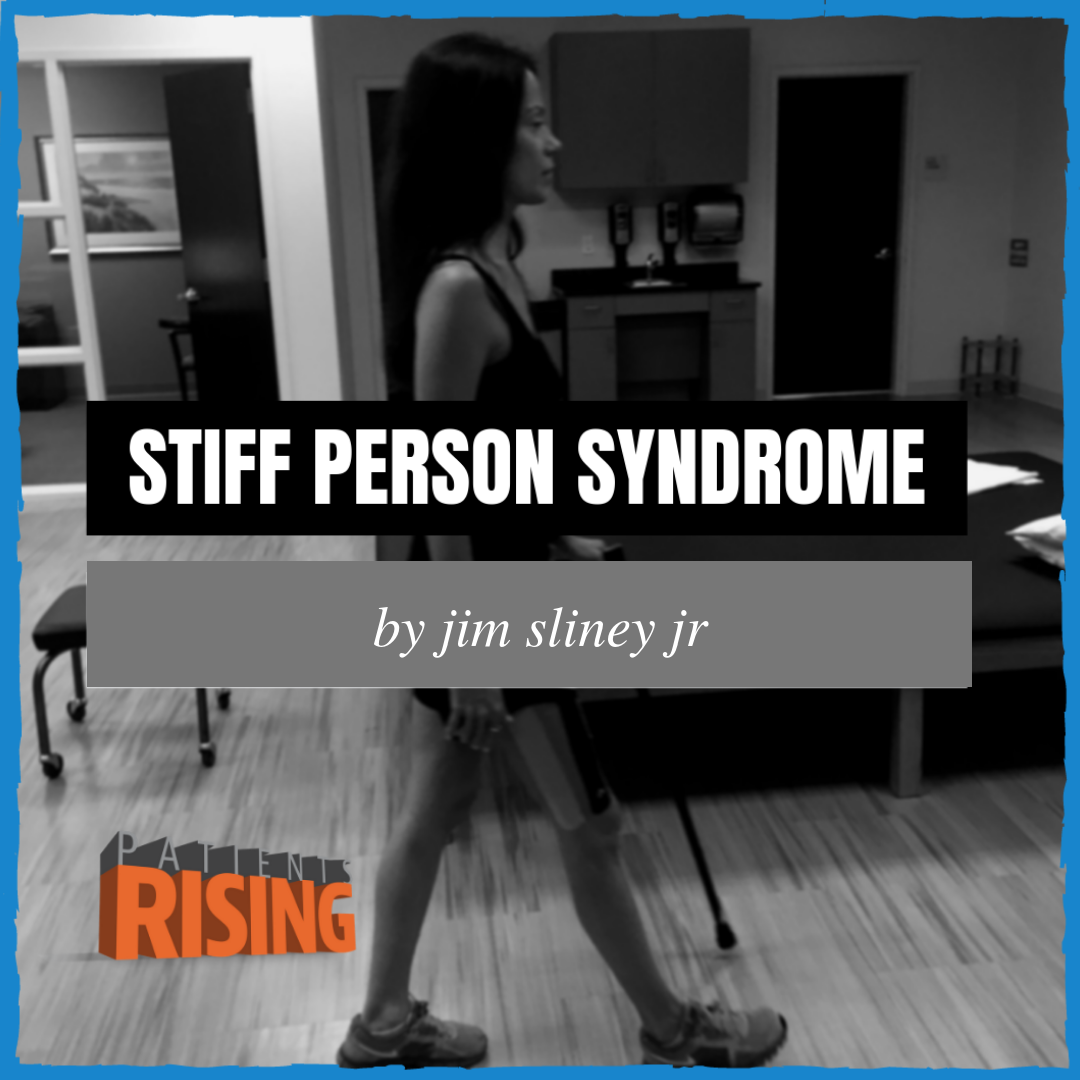 From the Editor: This is the story of a woman named Ann from New York who lives with Stiff Person Syndrome. Throughout her story I will be inserting information about Stiff Person Syndrome from reputable sources because we’ve received a lot of questions about the condition. If you have any questions please ask them and we will do our best to update the article with answers for you.

I have been very sick for the past 12 years. It started in my neck and my lower back – sudden, painful muscle spasms and rigidity. It went down my leg. Then my foot would go numb. I would fall suddenly because my right leg would give out under me. There was a constant sharp pain in the right half of my body. I would stiffen up doing basic tasks. ‘Pushing through it’ only made it worse.

STARTING IN THE DARK

I saw specialists and had tests, but no one had answers. A few doctors told me ‘it would get better’ and prescribed physical therapy (PT). I did PT every day on my own (I’m an experienced Physical Therapist) but also went to skilled sessions where we tried everything in the book (and some things not in any book) trying to find a way to make improvements.

I only got worse.

aims to control symptoms and improve mobility and function. While some people on treatment for SPS may maintain reasonable levels of activity, the majority become increasingly disabled over time. Treatment options depend on the symptoms and severity in each person.

Physical therapy and occupational therapy are also an important part of management for SPS and may help with side effects of medications (such as weakness) in addition to symptoms of the disease.

You can learn more about medication and drug treatments by visiting https://rarediseases.info.nih.gov/diseases/5023/stiff-person-syndrome

Pain went up my spine. My rib cage collapsed on the right side, distorting my back and shoulder. Walking and moving were almost impossible. My chest felt weighed down and I had shortness of breath and difficulty speaking, even at rest. My neck was completely stuck. At this point I was significantly crippled. I was dying.

TRYING TO FIND A DOCTOR WHO COULD HELP ME

I went to Johns Hopkins twice but they misdiagnosed me. They were not thorough and they didn’t listen. They even  directed to stop taking the only medications that were working for me at the time and without them even consulting with the doctors who knew me. After such negligence I could no longer trust them. I never went back.

I also saw an Immunologist, who within 5 minutes could tell that I was very sick. He took over ten vials of blood and gave me an inhaler. I got a call a few days later to tell me that my blood had some immune system abnormalities, and we needed help getting a diagnosis. He referred to a world-famous Rheumatologist in New York City known to be an excellent diagnostician. I didn’t know it then but that referral saved my life.

When I saw this new Rheumatologist, he could see I had difficulty with all of my movements. He studied my extensive medical records and called me from his home later that same night to start me on a 2-week trial of 40 mg Prednisone. It helped. That led him to explore a systemic cause for my symptoms.

He studied me carefully for months, taking lots of blood and gradually giving me more medicines that helped me. I was started on high dose intravenous immunoglobulin (IVIG) in 2010, twice a week, 6-hour drips. For the first time in many years, I could move my head an inch to the right. It was a major sign of hope and progress! We concluded I had an immune-system mediated disorder affecting my central nervous system (CNS). He diagnosed me with Stiff Person Syndrome.Treatments continued and we documented it all carefully. 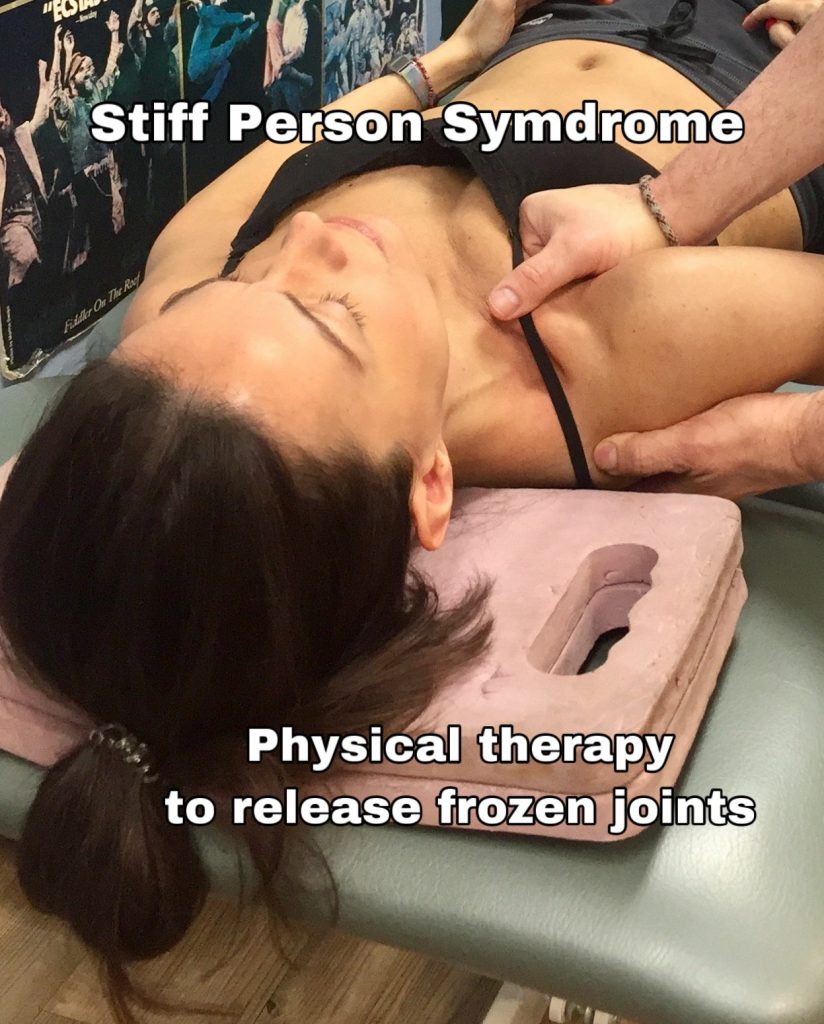 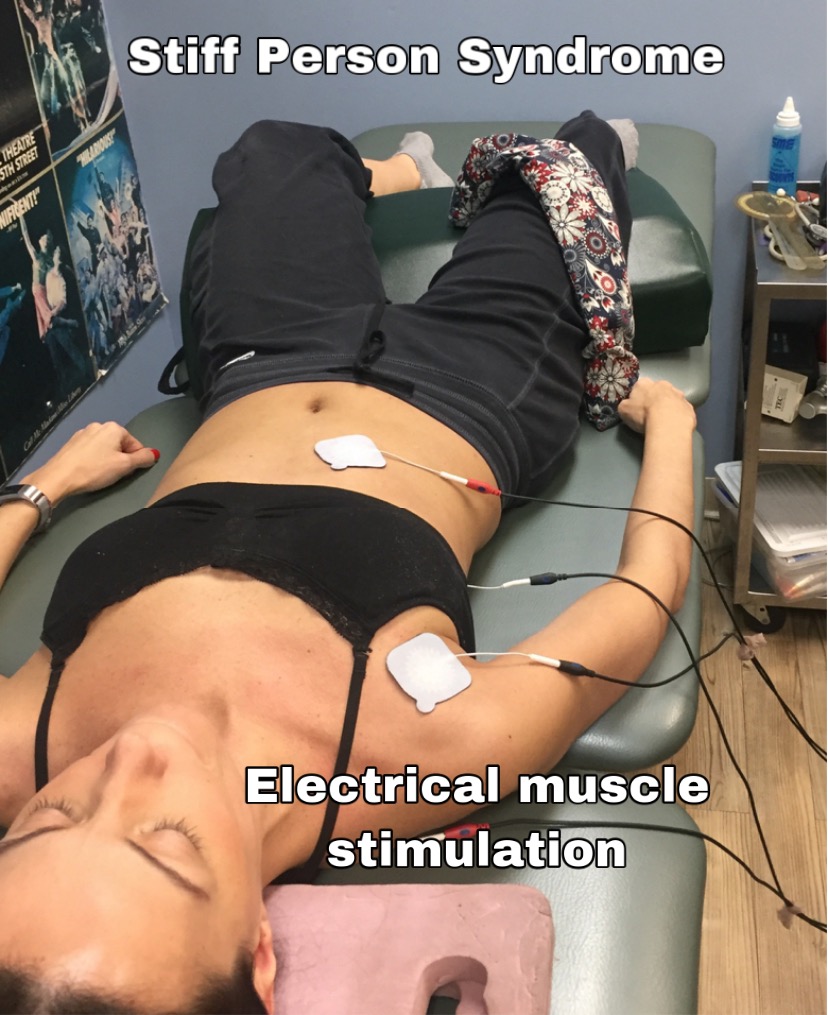 We worked together like a team. He listened to me carefully and respectfully. He didn’t dismiss my ideas or reduce me to a medical record number.

stiff person syndrome (SPS) is typically done based on symptoms, a detailed medical history, and various tests used to support the diagnosis or rule out other diseases with overlapping symptoms. One commonly used test is a blood test to detect the presence of glutamic acid decarboxylase (GAD) antibodies.About 60-80% of people with SPS have antibodies against GAD that can be detected on a blood test. The absence of GAD antibodies does not rule out SPS, but the presence of high levels of GAD antibodies strongly supports the diagnosis. GAD antibodies may also be measured in the cerebral spinal fluid from a lumbar puncture.

Other testing that may be used to confirm or rule out the diagnosis includes:

Genetic testing currently is not available because the underlying genetic cause of stiff person syndrome has not been established.

After a lot of hard work I made progress, but I was still very unwell and starting to plateau. My Rheumatologist got an idea. He called in his own personal Oncologist. He asked her to get me a chemotherapy drug he believed would help me. It had never been tried for Stiff Person Syndrome before but had been successful with other autoimmune diseases.

It was not FDA approved and was quite difficult to get. This Oncologist was the only one in the country willing to go through the numerous levels of medical appeals needed to get the drug. She worked with me in her office since the hospitals (which knew nothing about SPS) would not admit me.

The first round showed promise so together they created a special protocol and gave me another round 3-months later. This resulted in a blood level remission and stopped the attack on my CNS! It is not an exaggeration to say they saved my life. Yet, I was left with extensive right-sided muscle damage from suffering for years untreated and misdiagnosed. 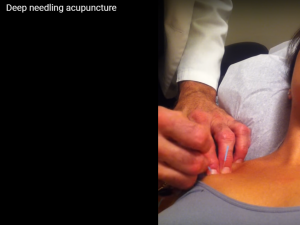 Since that experimental and successful chemotherapy I have made significant progress which has been making medical history. I am down to 4 major medicines to help decrease inflammation, relax muscles and help breathing, in addition to using 2 electric heating pads every day to help loosen my muscles. I do advanced physical therapy where my frozen areas of muscle are released. the damaged spots of muscle along my right side are broken up using a specialized needling technique [see video]. This therapy is extremely painful, but it’s the only method that has helped heal my muscles and restore better movement and function.

TREATMENTS NOT COVERED BY INSURANCE

My medical team is world class, yet as a PT and a patient with a very rare illness I have to guide them through every treatment session to achieve maximum results. The lack of awareness and research leaves SPS without an accepted treatment protocol so everything is considered “experimental”. This is the argument my insurer makes to not-cover my treatment. It is all very expensive.

And yet, I am a study-of-one beating one in a million odds.  My Rheumatologist knew that there wasn’t going to be a study or clinical trial any time soon to help out, since the NIH and NORD had already failed to take action on SPS. We fought hard against the ignorance in the medical and healthcare community to make recovery possible. Someday I hope this will become an accepted treatment.

Without a doctor who believed me, I would have died 6 years ago.

I CAN’T GIVE UP

Despite the unbelievably expensive costs, I need to keep going for my critical treatments to get better and fully recover from this. Getting around is very hard because I can’t use crutches or a wheelchair due to the stiffness and difficulty breathing. Even if I could use a motorized wheelchair much of our society is still not wheelchair accessible. I use a cane and keep my right leg taped up for support.

Living with Stiff Person Syndrome requires pacing myself, but if I ever stop progressing or even slow down, my muscle damage relapses and locks up and I lose my hard-won progress. I am at risk for dying at home, alone, frozen, unable to move.

Scientists don’t yet understand the complete picture of what causes stiff person syndrome, but research indicates that it is the result of an abnormal autoimmune response in the brain and spinal cord. Autoimmune responses occur when the immune system mistakenly attacks the body.

Some individuals with stiff person syndrome will have antibodies to amphiphysin, a protein involved in the transmission of signals from one neuron to another. Individuals with these antibodies have a higher risk for developing breast, lung, or colon cancer.

WHAT STIFF PERSON SYNDROME NEEDS – WHAT I NEED

There is no medical foundation, community support or celebrity face of SPS. No ribbon, no race for a cure. What the Stiff Person Syndrome community needs, what I need so I don’t die, is an attentive network of personal and medical support and sensible insurance coverage to pay for medically necessary treatments just like anyone else in this country with a major illness.

Other people with SPS can be helped like I have been if we could raise awareness. But I have a long way to go. That’s why I tell my story. With assistance and support I could be doing a lot better.

My Rheumatologist has said that I have suffered greatly, had to make real sacrifices but that I can also help others with my story. I am thankful to be alive to tell it, and really need more people to listen and step up and be supportive so I can complete this journey and so others with this rare disease can have hope.

Ann has been a licensed Physical Therapist for almost 20 years. She has worked in a hospital setting and at several companies as the director of PT programs and has also been involved in private practice. Ann used to be a personal trainer in college and has helped people in the community to find health and wellness solutions. She lives in the NYC area and enjoys reading in her spare time.

From the Editor: This is the story of a woman named Ann...

Kelly is a physical therapist who spent seven extremely...