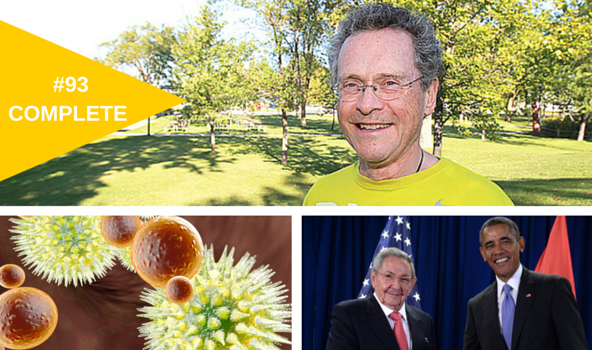 Good News of the Week

Start your day off with some good news. Jesse Varner of Virginia’s WAVY-TV profiled our friend and inspiration patient Don Wright, who completed his 93rd marathon since he was diagnosed with cancer.

Wright was in Virginia Beach over the weekend for the Shamrock Marathon. He finished with a time of 6:43:50. And he’s well on his way to his ultimate goal of running 100 marathons in the 13 years since his diagnosis.

Don ran his first marathon June 21, 2003, when he had the first signs of multiple myeloma, a blood cancer that affects cells in the bone marrow. Join us in tweeting:

Video: How Doctors Boost the Immune System to Fight Cancer

In next month’s edition of Scientific American, Karen Weintraub has published an in-depth investigation into how physicians are tapping our immune systems to battle melanoma, lung cancer and aggressive forms of leukemia. We’re looking forward to reading the piece. In the mean time, check out this great video posted on the Scientific American website, which

“Researchers are finally beginning to understand which parts of the immune system to tweak in order to cure at least some people,” Scientific American notes.

For the first time in nearly a century, an American President has set foot in Cuba. This week, President Obama met with Cuban President Raúl Castro — with the world leaders holding a joint press conference in Havana.

“Our medical professionals will now collaborate in new areas preventing the spread of viruses like Zika, and leading new research into cancer vaccines,” Obama said.

In particular, Cuba and the United States are expected to tackle the fight against cholera in Haiti and the ongoing response to Zika virus. Cuba remains on an interim travel guidance related to Zika since last week.

Of course, Castro couldn’t resist a jab at the United States.

“Actually, we find it inconceivable that a government does not ensure the right to health care, education, social security, food, and development, equal pay, and the rights of children,” Castro said.