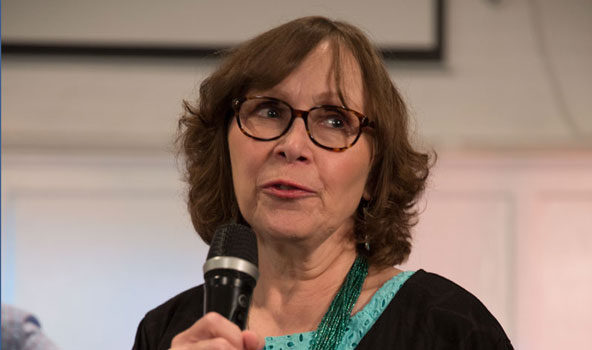 I was diagnosed with Stage IIIc Ovarian cancer in 1999. The survival statistics were bleak: a 15% chance of surviving five years.

I chose to look on the bright side while developing a support system.  I joined an in-person ovarian cancer support group, subscribed to an ovarian Listserv, joined Gilda’s Club, attended ovarian cancer conferences and training sessions, and traveled to Capitol Hill to advocate for funding and legislation for ovarian cancer.

I educated others about ovarian cancer at health fairs, conferences, cancer walks, medical schools, and fundraising events. Participating in an ovarian cancer community provided purpose, increased my knowledge, normalized my experience, filled me with hope, and gave me lifelong friends.  After I completed treatment, I also quit my job in corporate America for more fulfilling work at a not-for-profit organization.

In 2002 during my first recurrence, an oncologist told me that I’d keep having recurrences with shorter remissions until this disease killed me. He was wrong; instead I enjoyed an 11-year remission!  In 2013, my disease recurred. In 2014 I hit a major bump in the road when I had a bowel obstruction due to the spread of ovarian cancer. I was unable to eat. The bowel obstruction caused so much pain, nausea, vomiting, and headaches that I wished I was dead. While hospitalized, I had seizures and a brain bleed and was transferred to a university hospital’s neurological intensive care unit.

When my neurological problem was under control, I was still vomiting and having migraines. I gladly accepted the help of a palliative care physician who helped me feel more comfortable. Since I was too malnourished and weak for surgery, intravenous TPN was started. It caused me to gain thirty-three pounds in a week.

Finally I had surgery that resulted in a bowel resection and intestinal diversion: an ileostomy and a mucous fistula colostomy. The early months as an ostomate were very difficult. I suffered from frequent leaks, broken, painful skin, and frequent crying jags. One day I decided to be grateful for my life-saving ostomies.  I sought information and found an online ostomate community that has improved the quality of my life immeasurably. Thanks, Ostomyland!

The pathology report from the 2014 surgery revealed that I now had low-grade serous ovarian cancer. Since this rare cell usually does not respond to chemotherapy, I opted for hormonal treatment. Unfortunately, my disease progressed while I was on it. With the help of the Ovarian Cancer National Alliance, EmergingMed clinical trial navigation service, and my gynecologic oncologist, I selected the Phase III MILO MEK Inhibitor clinical trial designed specifically for my cell type.

I enrolled in the trial and am excited about this new drug. I am grateful that ovarian cancer treatment has become customized by cell type. I feel very hopeful for the future.

Update: Sadly, Lynne lost her battle with ovarian cancer on September 19, 2016. Her legacy continues in her family and friends. Her positive light is truly missed.

I was diagnosed with Stage IIIc Ovarian cancer in 1999.

I am an immigrant with legal status in the United States.