Drea Carbone reached out to us on Twitter to let us know how serious Myasthenia Gravis is and that its advocacy is thriving. Drea is a big part of why. 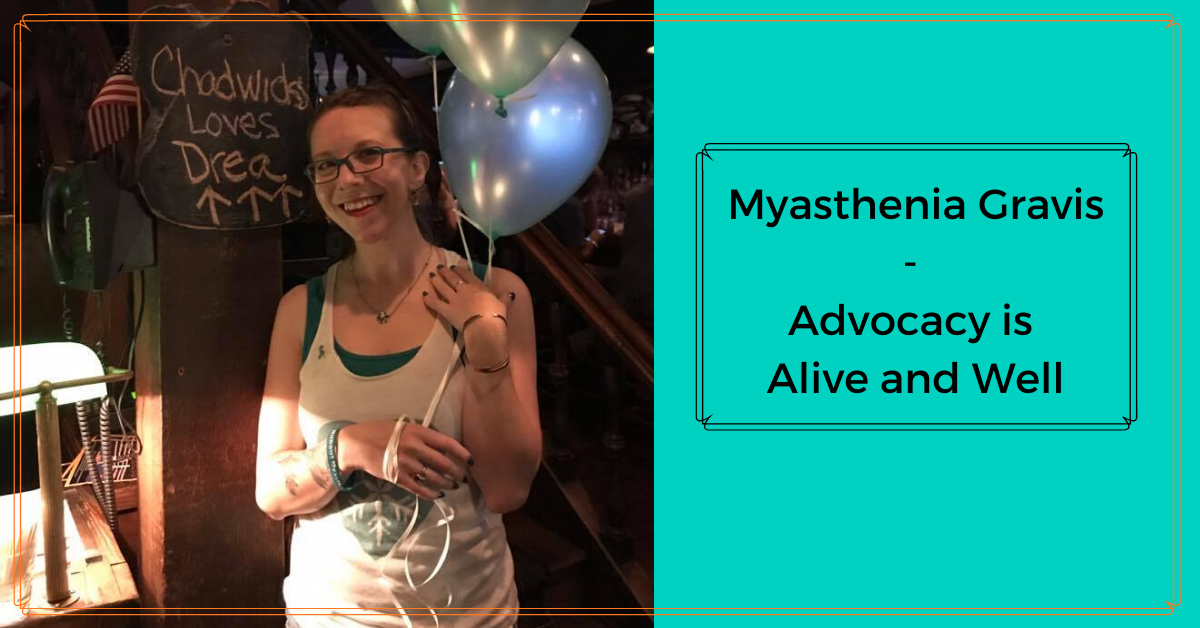 Drea Carbone, an accomplished advocate, tells us about how serious Myasthenia Gravis is based on her own personal experience with the disease. We published an article in 2017 that suggested MG was so rare that it didn’t have a Support community. Well, Drea set us straight on that. Here’s Drea….

For several years I had been experiencing worsening double vision, but not one doctor ever mentioned it could be something serious. I was given prisms in my glasses and sent on my way. Years later (2017) a strabismus specialist told me it was too severe for prisms, but easily fixed with surgery. The first step was a series of blood tests to rule out any potential causes, “like Graves Disease or Myasthenia Gravis, but don’t worry,” he said dismissively, “you don’t have any of them.”

Not long after, I sat in his office again with the lab results.

Surgery was no longer an option. I had Myasthenia Gravis. Myawhat?

Once home, searched the internet. The more I read about Myasthenia Gravis (MG) symptoms the more I could relate. Weakness? √ Tiredness? √ Trouble swallowing? √ Memory issues? Biiig √.

Months before ever hearing the words “Myasthenia Gravis” I had contacted a neurologist, afraid my symptoms might point to a serious issue. When I updated that doctor after my now-formal diagnosis, he came to the phone to say he couldn’t treat MG. But he did direct me to the Myasthenia Gravis Foundation of America (MGFA) and their list of MG specialists across the country.

Their website showcased the MG Walk. Finally something familiar to me. Having participated in the American Cancer Society’s “Relay For Life” for years, I knew I wanted to participate. But…first things first.

GETTING THE HELP I DIDN’T KNOW I NEEDED

I set out to find a neurologist who could help. It took me six months and many phone calls before I could even get an appointment. What to do in the meantime? I found support groups (both virtual and in-person), fundraisers, and articles–and again, the MG Walk. So, thanks to a cadre of friends and family, we created the “Kiss Myas(thenia Gravis)” team and signed up for the nearest Walk.

With the help of those same friends and family as well as the incredible generosity of my local “Cheers,” Chadwicks of Alexandria, VA, and my employer, beadshop.com, we quickly raised several thousand dollars for the 2017 MG Walk of Virginia (we’ve also done it each year since). At the event I met others with MG for the first time. People just like me, going through what I’d been going through! 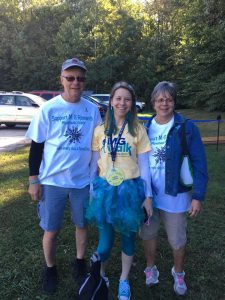 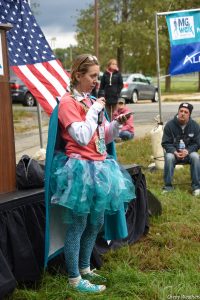 Drea doing what she does best; advocacy

I also had the pleasure of meeting folks working for the MG Walk and the MGFA. Impressed with my attitude, creative fundraising efforts, humor, and willingness to advocate for myself and other MG patients, I was asked to be “the Virginia MG Walk Hero” the following year. Honored, I told my story to all in attendance at the 2018 Virginia Walk, and caught the attention of a biopharmaceutical company. They invited me to speak for their 2019 Rare Disease Day event in Belgium. It was a novelty for them: an experience with an actual patient.

I had tried the most common and safest drug, Mestinon. It did not work for me. It didn’t even give me the common side effects that most patients experience. After many months of dosage experimentation, I gave up.

The next step was to try a high dose of Prednisone. This is where I put my foot down. On the heels of my mother (a cancer survivor and Parkinsons Disease patient) breaking her femur and being sidelined by it for over a year, the last thing I wanted to do was initiate bone loss in my own body. I was also wary of other side effects to Prednisone, like mood swings and irrational behaviors, because I was already living with anxiety and depression.

Editors note: other treatments, which are few, pose additional challenges to access

These treatments being difficult to get just magnify how serious Myasthenia Gravis is and why patients need better access.

Fortunately, my symptoms were manageable with supplements and selfcare (getting rest, keeping stress down, listening to my body). It was at that point, in early 2019, that I decided to take a break from focusing on my MG, and focused instead on what I could do for the MG community at large.

RAISING AWARENESS WITH MY FEET

Joining the National MG Walk Committee, a group of MG advocates and patients, I was intent on making MG Walks bigger and more successful than ever. The MG Walk was first started in 2011, and now there are over 30 walks nationwide. In 2019, upwards of $880,000 was raised! At each MG Walk you can expect to find patients, caregivers, medical personnel, pharmaceutical drug companies, corporate partner sponsors, and FUN. I attended four MG Walks in 2019: Boston, San Francisco, Virginia, and Maryland.

MORE GROWING TO DO

MG doesn’t have a celebrity patient like Michael J. Fox or a superviral fundraiser like the Ice Bucket Challenge. Still, efforts to create more awareness for MG abound, from ramping up social media presence to Mayoral Proclamations to lighting up major-buildings in teal (our official color).

There is also a virtual Walk campaign and DIY fundraising opportunities. A groundbreaking new mobile app, MyMG, has recently launched, enabling patients to track symptoms and daily activities. The MG patient Registry, is an active database of MG patients for research, education, and treatment. You’ll find us very active in June in particular, which is National MG Awareness Month.

Twice annual publications of the Focus on MG Magazine showcase all these efforts made toward a world without MG. We are a small group, but we are a mighty one—with no plans to stop or slow down. 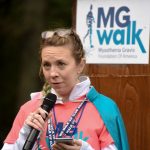 Drea Carbone is a native New Englander who has lived all over the US. She finally settled down in the DC area with her boyfriend, Matt, and their rescued pets, Caroline (a dog) and Betty (a bunny). In addition to her roles in MG Advocacy Drea enjoys beading and crafting, cooking and baking – especially decorating cakes and cookies! She also spends time with her very best supporters: her friends.

Drea Carbone, an accomplished advocate, tells us about how...

Myasthenia Gravis – The Cost of MG

BY CANDACE HUTCHINSON I live with Myasthenia Gravis, an...