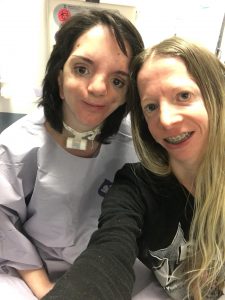 I became a patient at birth. The freedoms of living without disease didn’t exist. I was born with Treacher Collins Syndrome, a complex craniofacial condition that causes facial malformations, chronic disease, and crushing insecurities. I recall a specialty doctor’s visit with renowned surgeon Dr. Andrew Wexler at the age of five. I couldn’t help but gasp at other children who had similar but far worse conditions.

Many parents travel across the world to find their children the best means of care. Unfortunately, in today’s growing modern society, there is a scarcity of expertise, especially when it comes to doctor specialty and cranial facial conditions. To date, I’ve undergone over 16 multifaceted reconstructive plastic surgeries to repair and implement facial features and functions that I was born without.

The means for my care was always handled between my doctors and parents. The grass isn’t always greener on the other side; at home, I endured various childhood abuses. My stepdad was a registered sex offender who worked for the government, and my emotionally unavailable mother suffered from multiple traumas. While my health insurance was premium grade, at home, life was far less than fulfilling. I did, however, have the best doctors that health insurance could buy at Kaiser Permanente in Los Angeles, California.

The continuous travels to and from my doctor appointments were the only sense of family normalcy I had. Unlike many craniofacial children undergoing major operations as early as two years, after countless evaluations, my team of famed specialty doctors, decided not to perform surgery on me until I was aged 12. I remember going on a few television shows. Dr. Wexler was the leading physician in my case, and he always made me feel safe. I bravely went on screen and told the world that I wanted to look like Malibu Barbie. Doctors said they’d grant my wish, but that they needed to ensure that I was fully developed before placing me under the knife. I was designated as their unique case.

My craniofacial case has been discussed and exampled at notable medical conferences across the world. Dr. Andrew Wexler is among the most reputable craniofacial surgeons in the world, I was fortunate that he was my primary specialist. Because of him, I didn’t feel as alone as I was. I remember our talks before every daunting surgery. I asked him what if I didn’t make it? He said it was impossible, and while goofing around, he humored me in his Elmo hat before strolling me through those intimidating double doors.

Aside from my home life, it felt exhausting having a disability and to be lost in translation. I was born completely deaf with a severe speech impediment. However, I was very fortunate to have been able to commit to five years of speech therapy. Also, I was among the first to have undergone a cochleae Baha surgery where they implanted a titanium screw inside my skull directly connecting to the cochleae. This device gave me rectified hearing hence amplifying my educational abilities and lessening the developmental delays.

I have endured numerous eye graphing surgeries that opened my tear ducts and added to the lack of surrounding skin tissue. The aim of these surgeries also helped to normalize my small round eyes. Another operation involved doctors taking cartilage from the roof of my mouth, down to the bone, and adding liposuction fat tissue extracted from my belly button, in efforts to fill in the lack of skin tissue around my eyes.

The rhinoplasty surgeries involved dismantling my nose three times to repair choanal atresia with failed hopes in allowing me to breathe from my nostrils. Throughout the years, they’ve placed screws and steel plates to create a solid facial foundation with an added bonus, giving me the aesthetic appearance of cheekbones and a chin, but no less pain.

There were discussions to extract my malformed ears, also known as microtia atresia, when I was 14. They discussed forming new ears through six surgeries, in stages, using tissue cartilage taken from my ribs. I was then referred to UCLA, where they made me fake ears using my mother’s ears as a model instead. I was given the unnerving thought that I would then glue my prosthetic ears on every morning. After trying them on, I couldn’t bear how freakish they looked and felt, so I ran out of the building. Today I serve as an active volunteer and supporter of Dr. Justine Lee at UCLA; she was mentored by Dr. Wexler.

To date, I’ve endured many teeth extractions and 8 years of braces to prepare for reconstructive jaw surgery to open my severely restricted airways so I could better breathe. My first major jaw surgery was among the most painful. After doctors reconstructed my jaw, it was a gruesome recovery period. I spent a week in the hospital and lived with my jaw wired shut for three months. The results were unfavorable and caused irreversible damage leading to the need for a second major jaw surgery due to collapsing airways.

Twelve years after my first jaw surgery, I was diagnosed with sleep apnea and handed a breathing CPAP machine after almost dying from a pulmonary edema episode in the highly elevated mountains of Utah above 9500 feet altitude. I couldn’t adapt to regularly using my CPAP device because it was painfully taxing on my face. Additionally, I suffered from cranial swelling due to high levels of bodily inflammation. Residing in the rural, isolated mountains at 7300 elevation, in a food desert didn’t help either.

I knew I had more deep-rooted problems that were not yet addressed, most of which consisted of bad habits, a prevalent issue among the disability populations. I started reading how-to books and did some Google research. I learned that the harms of too many prescription drugs and basic diet principles of nutrition are not widely covered in the health care system. Doctors only undergo a minimum of 25 hours of nutritional health. I wondered if this mattered any, especially after watching disease claim the lives of my best friend and grandmother.

I decided to take matters into my own hands. I quit smoking cigarettes, tapered off the 14 daily prescription drugs, and I adopted an organic vegan plant-based herbal diet. It was a patient process of waiting for results after three years. I reversed my need for a CPAP breathing machine, eliminated the cranial swelling, and the snoring has since dissipated too. I unearthed a new life with my husband heightening our well-being like never before.

Currently, I am finishing my second Master’s degree in Public Health and serving a volunteer internship at Patient’s Rising, a national non-profit dedicated to providing support and education to people with disabilities. I’ve learned that the primary objective of our health care system is to prevent widespread disease in efforts to protect human public health. The demands of the medical system have, in many ways, become an inaccessible and unaffordable environment. Many patients are being left without care because of the burdensome financial costs and long waiting times.

Government public health systems are actively working to address this problem, and technology is currently in significant transition. There are active and new systems being put into place, enabling patients to access healthcare providers electronically from their mobile and computer devices. The ease of technology has allowed patients to track their medical conditions, easily refill prescriptions, manage specialty referrals, meet with their primary care physician, and even participate in web therapy.

After various specialty doctor appointments and a second round of braces for three years, I was now preparing for my second jaw surgery to fix the damage and successfully open my airways. I had scheduled three times to undergo surgery with bouts of rescheduling because I was scared and unsure. Something even more concerning to me is that every operation where I’ve been placed under a deep anesthesia sleep has been that much harder on my heart health. I took advantage of Facebook support groups and examined all of the continuous surgical mishaps that families were enduring.

I also assessed my craniofacial friends and their experiences. Moreover, I accompanied my dear friend Lisa who also has Treacher Collins to a repair surgery from a botched mishap, leaving her with a gaping open hole in her skull. A faulty operation resulted in her surgically installed prosthetic ear settling on the side of her face. I urged her to stop going to new doctors and to go back to the source, where she was born at Loma Linda University. LLU is a highly notable medical system that competently rectified the issue allowing her wound to close and heal as it should. I contacted a few of my online craniofacial friends born with my condition; many of them have endured well over five major jaw surgeries, worsening their condition, ultimately leading up to the replacement of jaw joints because of the pulling weight on their lower jaw.

I also examined many cases of other craniofacial parents who’ve unfortunately lost a young child. Common cases involved these parents waking up to their child, not breathing. One of the mothers on my Facebook friends lists lost her daughter recently; she was only three years old. It broke my heart, but in many ways, it brought the crushing realities of my condition to the surface.

My last-ditch effort to determine whether or not I was going to put myself through a second major jaw surgery was going back to the source. I visited Dr. Wexler before his retirement after selflessly serving his patients in the USA and in poor third-world countries abroad. First, he expressed to me that he couldn’t believe his eyes; he thought I was a lost cause. Once reaching adulthood, I became hardened and mentally unstable because of the physical, sexual, and psychological childhood traumas I endured, including Stockholm syndrome. Nearly in tears, Dr. Wexler held my hands, and he said how proud he is that I rose above all of the pain and built a beautiful life with my husband of 13 years. Words can’t express how much I needed to hear those words at that moment.

Dr. Wexler assessed various x-rays from before and now. He proceeded to tell me that the first surgery did more damage because there was not as much bone as they had initially thought there was. They surgically performed what they could with what they had to work with, which unfortunately caused the damage. I was 19 years old then, and now I’m 33. I haven’t physically developed much since then, and my new diet changes have completely paved a path of optimal wellness.

Today I live without the need for any more surgeries unless they are medically necessary. In the end, we planned a secret party to celebrate Dr. Wexler’s retirement, and he even brought out my childhood pictures. I didn’t have much of a family growing up, but my doctors at Kaiser Permanente have been the closest thing. I am a mighty powerful bionic woman, and I take responsibility for my own health using the medical system when needed. Thank you, Dr. Wexler, and to the Kaiser Permanente craniofacial team for making me feel and look like Malibu Barbie.