According to a 2010 National Institutes of Health workshop, $315 billion is spent every year on health care bureacracy costs related to billing & insurance activities. 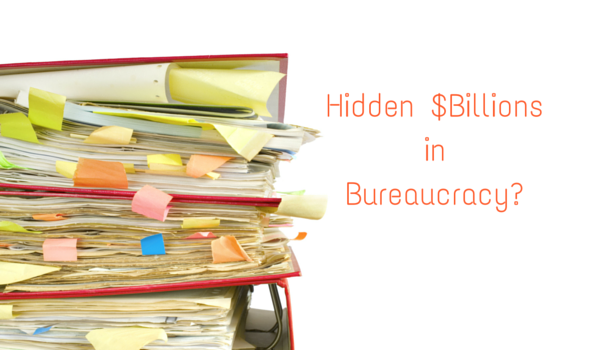 Just two years from now it’s projected we’ll be spending $315 billion dollars on one segment of our health care costs. As the saying goes, “That’s billion with a B.”

But this is where the discussion usually goes off the rails. If we put price in perspective and cost in context, we learn that even $315 billion does not represent excess spending on medicines, despite current political rhetoric and the drumbeat of certain doctors-turned-pundits. In fact, a new study argues that much or most of that $315 billion does not contribute to anyone’s actual health care.

According to a 2010 workshop from the National Institutes of Health, $315 billion represents “the time, costs, and personnel necessary to process billing and insurance-related activities” – a complex web of payment validation, claims processing and treatment approvals that change from one insurance provider and benefits manager to the next. In short, we are paying a huge chunk of that $315 billion for an insurance bureaucracy that second guesses physicians, places cancer therapeutics on tiers with high copays and delays needed treatments through the “fail-first” requirements of step therapy.

An excellent commentary in the Wall Street Journal takes note of labor costs. Economist Michael Mandel points out: “It’s important for policy makers to understand that innovative medicines bring down long-term costs by reducing the amount of labor needed by the health-care system. For example, the new drugs that treat and cure hepatitis C will, over time, reduce the number of labor-intensive and extremely costly liver transplants, each of which costs on average more than half a million dollars.”

Mandel is the chief economist of the Progressive Policy Institute, with solid credentials as a, well, progressive, so it matters when he declares, “The cost of labor amounts to more than 40% of the increase in the total cost of personal health-care spending since 2007, while the cost of prescription-drugs amounts to only 10% of the increase.”

While more than a few think we should be getting pharmaceuticals from Canada because they cost less in the Great White North, how about taking a look first at importing some of their better business practices first? Casalino estimates that Canada spends between $15 and $32 billion less than this country on billing and insurance-related activities. And James L. Heffernan from the Massachusetts General Physicians Organization says, “Standardizing administrative complexity could save $26 billion for physician and clinical services’ billing operations.”

Mandel rightly concludes “the way we pay for innovative drugs can certainly be improved. But the anger directed at the pharmaceutical and biotech industries overall is misdirected.” At a time when payers, providers and patients need to join together for a comprehensive reform conversation, it’s perhaps deliberate misdirection to attack life-saving innovation, instead of streamlining the bureaucratic billing nightmare imposed by our current system of insurance. If only we had a pill for that.