Anthony tells us why non-alcoholic steato hepatitis (NASH) is something so many Americans need to know about but probably don't. 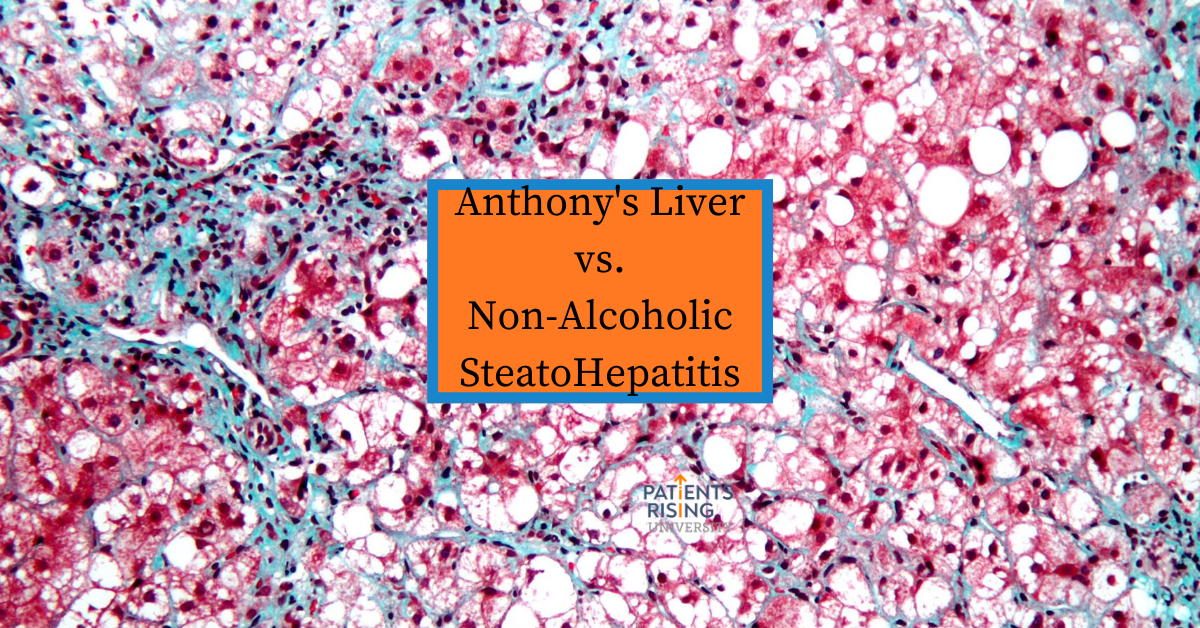 This is the story of Anthony Villiotti’s liver, and Anthony’s liver matters to you. It matters because you know someone who is overweight or obese, has a large waist size, has high blood pressure or high blood glucose, maybe with insulin resistance, or high triglycerides or cholesterol. And if you do, that person might develop Non-Alcoholic Fatty Liver Disease (NAFLD). And if they’re a bit more like Anthony and type 2 diabetes, they’re more likely to get Non-Alcoholic SteatoHepatitis (NASH). That’s a very bad thing. I’ll let Anthony explain….

“Since the late 1980s I had been seeing my general practitioner on a regular basis for type 2 diabetes. In 2005, after running a liver panel of bloodwork, he informed me that I had a fatty liver. I had never heard of the condition before but it didn’t seem particularly worrisome. He said I should lose some weight but otherwise didn’t make a big deal of it. I walked out of his office that day still concerned about my diabetes but not thinking much of the fatty liver diagnosis. I was overweight, so why shouldn’t my liver also be a little fatty.

NINE QUIET YEARS, AND THEN….

I continued to see the same doctor over the ensuing nine years. Sometimes he mentioned the fatty liver and sometimes he didn’t. In 2014 he asked me to do an MRI along with my usual bloodwork. After getting the MRI results, he called me and told me I had nonalcoholic steatohepatitis (NASH) and possibly even cirrhosis. How could I have cirrhosis? Isn’t that a drinkers’ disease? As virtually a non-drinker, I never knew I was at risk for cirrhosis until the day I received that diagnosis.

At that point I was referred to a hepatologist to seek further treatment. She confirmed the cirrhosis diagnosis and encouraged me to lose weight. It is worth mentioning that I was experiencing no symptoms and I felt fine. 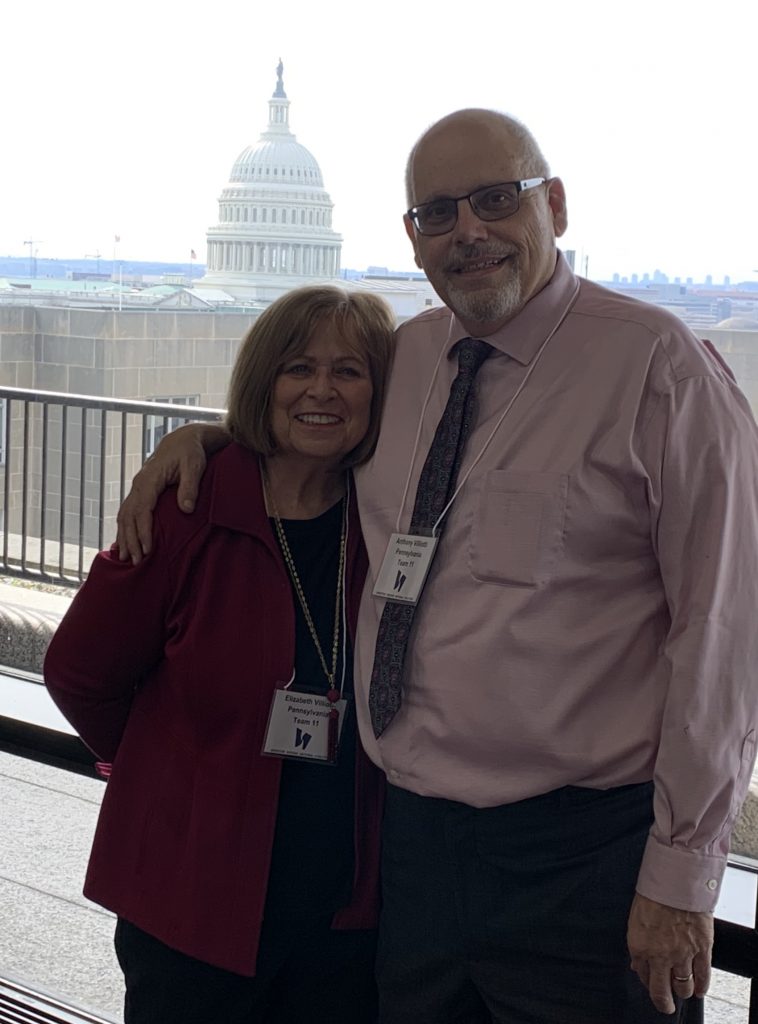 Betsy and Tony – speaking their truth to the powers in Washington D. C.

I did lose some weight but it was too late. My MELD (Model for End Stage Liver Disease) continued to creep up and there was some talk of a transplant being in my future. I was not very receptive to the idea of a transplant and being the optimist that I am, I was certain I would beat this disease. I still had no symptoms.

I continued with my diabetes medication and received periodic MRIs. In early 2017, I was told I had a cancerous tumor on my liver. Now I was worried. The oncologist recommended that I get on the transplant waiting list and also undergo Stereotactic Body Radiation Therapy (SBRT). The purpose of the SBRT was to stop the growth of the tumor and serve as a “bridge” to transplant. SBRT required five does of radiation over a 10-day period. After six months I would be reevaluated to see if the therapy had worked. He also told me that given the condition of my liver, I would probably start to notice symptoms (I was still asymptomatic at that point) and my liver could rapidly deteriorate.

After completing all the necessary tests, I was placed on the transplant list in June 2017. I learned that my MELD score would determine my priority on that list and that a transplant was not on the immediate horizon. After six months, though, I would receive “exception points” due to my cancer that would elevate me on the list.

That summer I began experiencing symptoms for the first time. Mostly, I was tired and my appetite began to be affected. The doctor recommended that I be careful with any travel and not to venture far from a hospital with transplant capabilities.

I was still feeling relatively healthy until October of that year. I woke up one morning and I didn’t know where I was. My wife was out at the time and she returned home to find me in a confused state. She thought I was dehydrated. I was not being very cooperative so finally, she called 911 and I was taken in an ambulance to the hospital. We learned that I had Hepatic Encephalopathy (HE). Ammonia was in my blood and made its way to my brain. I should point out that I don’t remember any of this; there’s a 12-hour gap in my memory that never returned. I was in the hospital for five days and from that point forward my brain was foggy. I was no longer able to drive and could not maintain concentration long enough to read a book. My wife asked the doctor if I would recover from this and they weren’t sure.

Over the next couple of months, I had a few less-serious bouts of HE, but we finally came to realize the dietary changes we needed to make to avoid it. The brain fog was a constant in my life, though, placing a great burden on my wife as my caregiver. 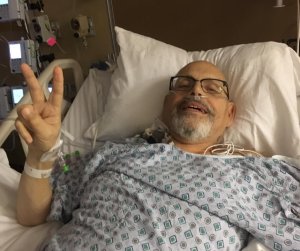 In the interim I learned that SBRT treatments had been successful. A day after learning that, I got another call from the oncologist telling me there was another tumor and I would have to repeat the procedure. But another surprise came a couple days later. ‘We’re not going to repeat the procedure’, they said, ‘because there is too little “good liver” left and the procedure would be too dangerous’.

By mid-December I received my “exception points” which meant a transplant was getting closer. It took until March 2018, though, before I received the transplant. That three month wait was a difficult time period from an emotional standpoint. So many ups and downs. One day I’d be sure I was not going to live long enough to get the transplant; the next day I’d be planning a vacation to be taken after the transplant.

The transplant was successful and I was only in the hospital for eight days. Life after transplant is good, but the anti-rejection medications that I will be taking the rest of my life bring their own issues. The transplant was not a “get out of jail free card.” Those medications help but leave me having to take daily insulin shots for the first time in my life and I have lost more than 50% of my kidney function. There is no free lunch.

My experience led me to form NASH kNOWledge, a non-profit with a mission of increasing awareness of nonalcoholic fatty liver disease.”

Tony is a native of Pittsburgh, PA and a graduate of Penn State University. He is a CPA and spent his business career in a variety of senior accounting and financial management position. Tony also has served on the Board of Directors for two publicly traded companies. 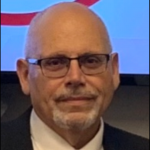 After retiring in 2003, Tony was diagnosed with nonalcoholic fatty liver disease. His disease progressed to NASH, cirrhosis and liver cancer, followed by a life-saving liver transplant in March 2018.

His experience with liver disease motivated him to form NASH kNOWledge, a non-profit corporation with the mission of increasing public awareness of nonalcoholic liver disease.

The organization Anthony started, NASH Knowledge, is a nonprofit whose mission is to increase public awareness of non-alcoholic fatty liver disease (NAFLD) and non-alcoholic steatohepatitis (NASH) across the nation, with an emphasis in the Pittsburgh tri-state region.

NAFLD deaths on the Rise

The American Association for the Study of Liver Diseases says in a publication from August of 2019 that deaths from NAFLD are on the rise. Their research concludes that NAFLD‐related deaths are increasing in the United States, especially among men, those aged 55 or older, and non‐Hispanic whites and Hispanics. There is also an increasing rate of NAFLD‐related deaths among women, non‐Hispanic American Indian or Alaskan Natives, Mexicans, and Asian Indians. Cirrhosis accounted for the majority of deaths, but cardiovascular disease, diabetes melitus, hepatocellular carcinoma (HCC), renal disease, lung disease, and hypertension were all associated with the increase in deaths among adults with NAFLD, with HCC having the most significant increase in the trend for cause of death.

Is NASH on the radar at the FDA?

The Global Liver Institute (GLI) and other NASH patient advocacy organizations have submitted formal requests to meet with the FDA’s Division of Hepatology and Nutrition leadership. It is critical for the FDA to respond quickly, and clarify their understanding of acceptable risk-benefit trade-offs from the patient perspective to the NASH patient community.

What you can do to control risk factors:

Losing at least 10% of your body weight can be beneficial.

Cholesterol should be less than 200 milligrams per deciliter

National Institute of Diabetes and Digestive and Kidney Diseases – https://www.niddk.nih.gov/

The American Association for the Study of Liver Diseases – https://www.aasld.org/