In this Patients Rising University post, we explore Alzheimer's disease and the unique challenges faced by the Alzheimer's caregiver. 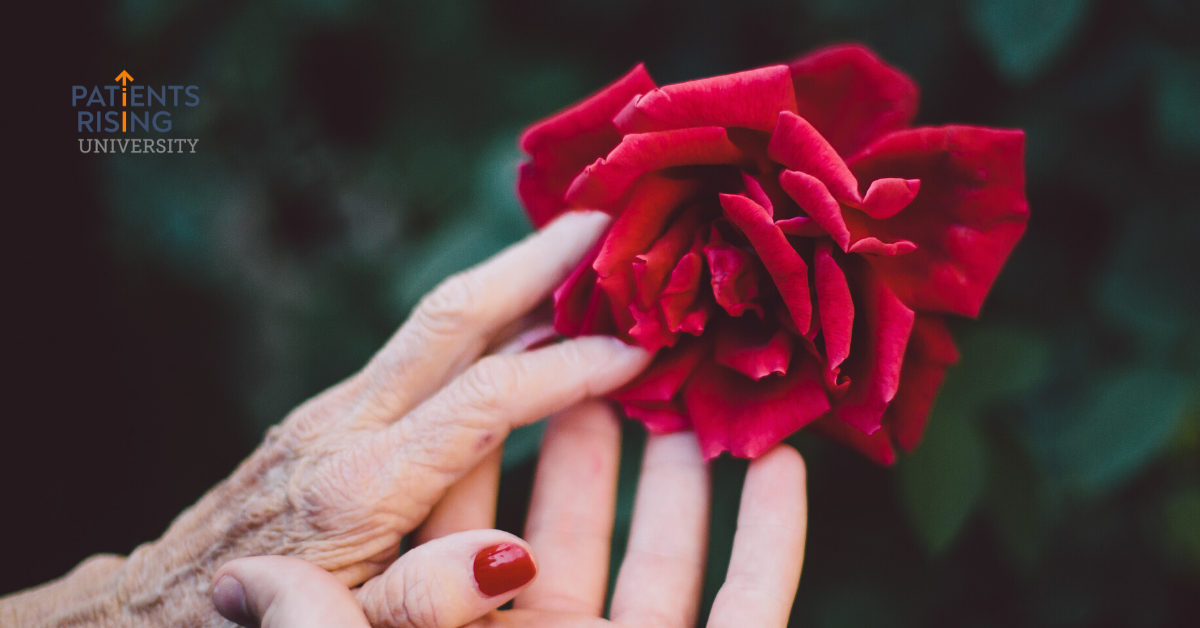 Caregivers carry a heavy load, and none moreso that the Alzheimer’s caregiver.

A form of dementia, Alzheimer’s leads to progressive memory gaps and memory loss with a tremendous impact on the patient’s and their immediate family member’s day-to-day activities.

According to the Alzheimer’s Association, it is responsible for 60-80% of dementia cases in the US. While age is the biggest risk factor (those >65 years usually develop the disease), early-onset Alzheimer’s (diagnosed in those <65 years) affects 5% of the more than 5 million who are living with the disease in the US. Interestingly, heredity or genetics has not been identified as a strong risk factor for this condition.

The Need for a Fulltime Alzheimer’s Caregiver

Depending on the time of diagnosis, patients, family members and caregivers can consult with their physician and develop a plan for a manageable future.

Early stage of the disease presents with mild cognitive impairments—trouble retaining names or words, losing or misplacing items, unable to be organized—but as time progresses, so does the disease.

Moderate and late stages of Alzheimer’s can be extremely challenging; behavioral changes become more pronounced during these stages as the patient has difficulty expressing thoughts or with daily routine, and mood swings and frustration set in. Confusion about the day or their location, changes in sleep patterns, and the danger of getting lost are just some of the symptoms that become the new normal. By the late stage of the disease, the patient requires constant care and assistance.

Caregivers can have a variety of roles to play to support their family member:

Studies have highlighted the intense nature of caregiver burden in dementia compared with other diseases:

When an Alzheimer’s patient moves to a care facility, the caregiver’s daily role does not diminish. Rather, it changes into providing emotional support and communicating with the staff at the facility to ensure adequate care.

Physical Impact on the Alzheimer’s Caregiver

More than 16 million Americans have been estimated to provide about 18.5 billion hours of uncompensated care for patients suffering from Alzheimer’s or other forms of dementia.

The chronic stress of caring for a family member with this disorder can have a detrimental effect on the caregiver’s health, such as disrupted sleep patterns. A systematic review and meta-analysis by researchers at Baylor University found that caregivers of patients with dementia lost an average of 2.42 to 3.5 hours of sleep each week, either due to difficulty falling asleep or maintaining their sleep, which could be remedied with sleep interventions. A Brazilian study identified an increased risk of cardiovascular disease among older female caregivers of patients with Alzheimer’s disease; the women were also susceptible to mood-related disorders such as anxiety and depression compared to their normal counterparts.

Moving the patient to assisted care or a nursing home, however, may not necessarily heal a caregiver’s emotional state as might be expected: an exhaustive study in more than 2,700 dementia caregivers found that certain subsets of caregivers were at continued risk of distress even after their patient was institutionalized. When the authors delved deeper to better understand the result, they found that

a) female caregivers, especially wives, made up a majority of the subset with high emotional burden even after the admission to a care facility, and

b) likely because women caregivers persisted to provide day-to-day care themselves instead of letting the staff take over.

Husbands, on the other hand, were found susceptible to depression only after their wife’s admission to a care facility.

Financial Impact on the Alzheimer’s Caregiver

Turns out in 2015, Medicare spent 3-times as much on Medicare beneficiaries who had Alzheimer’s or other forms of dementia ($49,126) than it did on other beneficiaries in the same age group ($15,550 person). Medicaid payments were 19-times higher for the dementia population.

Despite these resources, the patient and family cost-burden remain high because family caregivers may end up dipping into their savings and retirement accounts to ensure continued care for their loved one. This can jeopardize their own future. Families or friends of patients with Alzheimer’s or other forms of dementia were found to spend an average of $5,155 OOP.

Immediate family members however, shoulder most of the cost:

While food/groceries were the most common expenses, family members reached into their own pockets to cover travel-related costs or to pay for medical supplies and medications or in-home medical and non-medical care.

The expenses took a toll on the caregiver’s or care contributor’s lifestyle:

Furthermore, cutting back on working hours or stopping work completely to support the family member with dementia added to the financial stress for many (35%) who participated in the survey.

Gaps in patient and/or caregiver knowledge about Medicare/Medicaid coverage can have a significant impact on finances. Medicare pays for inpatient hospital care, physician-certified impatient rehabilitation in a skilled nursing facility following a hospital stay, but nursing-home care is not covered. Medicaid has restrictions on the percent of long-term care costs that will be covered.

Detailed information on coverage policies of Medicare and Medicaid can be found on the Alzheimer’s Association website, here and here.

Useful Resources for Caregivers of Patients With Alzheimer’s 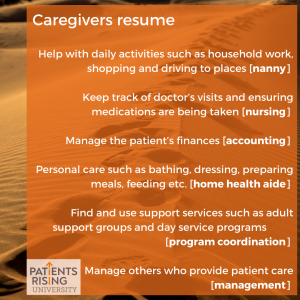 Patients Rising has explored the issue of elder care in the past.

And as always, we welcome you to share your stories with us. As Director of Patient Content, you can email me directly at jsliney@patientsrising.org

♦ Thank you to Surabhi Dangi-Garimella Ph.D. for her help creating this content.