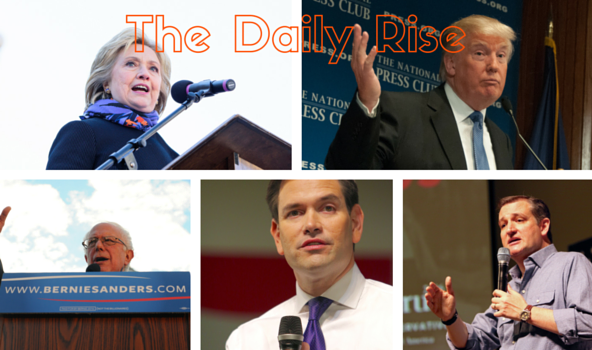 Kaiser Health News’ Julie Rovner writes that all of the 2016 presidential candidates’ plans to address the rising cost of prescription drugs fall short of their promises.

Regular readers of The Daily Rise will remember our Monday takedown of Trump’s “truly absurd claim” that he’ll save $300 billion a year on prescription drug spending by negotiating drug prices.

Donald Trump’s “plan” simply stated: “getting rid of the lines to create competition and lots of plans.” Hillary Clinton’s “plan” builds on the Affordable Care Act (ACA) by slowing out of pocket costs, cracking down on prescription drug prices by holding drug companies accountable and defending women’s access to reproductive healthcare and abortion.

In her defense, Hillary’s plan is slightly more expansive than Mr. Trump’s, but all of them are short on detail — especially when it comes to lowering drug costs. Try as they might, they all know cost issues cannot be solved in a soundbite or bullet point.

On the whole, this piece, which was published at CNN Money, glosses over some important details on drug pricing. Namely, prescription medicines account for less than 10 percent of total healthcare spending and less than one percent of the cost of cancer care.

Hospital care accounts for nearly a third of all healthcare spending. Claims for seven cancer drugs in North Carolina, the Charlotte Observer and The News & Observer of Raleigh found that charges for all but one drug were significantly higher at hospitals and hospital-owned clinics – usually more than 45 percent higher. As a specific example, analysis of claims by the newspapers and CMS showed that while the average sales price of Avastin was about $6000, patients were billed from $7649 to $22,680 depending on where they were treated. We reported on this type of price gouging recently in our commentary – A Healthy Dose of Accuracy.

For more, check out our blog post, “What Happened To the Truth the Whole Truth?”

In a piece titled, “Pharmaceutical Policy Reform — Balancing Affordability with Incentives for Innovation,” published in the New England Journal of Medicine, Dr. Rena M. Conti and Dr. Meredith B. Rosenthal provide several ways that we can start to reduce the cost of prescription drugs.

The pair note that much of the problem is concentrated among generic drugs, nearly half of which have become more expensive in the past two years. “Many price increases appear to be concentrated among drugs that are typically administered by physicians or hospitals or dispensed by specialty pharmacies,” the doctors write. That would put much of the responsibility on hospitals.

Conti and Rosenthal also point to the need to reform the federal 340B Drug Pricing Program, a program that gives participating hospitals major discounts, commonly up to 50%, on outpatient drugs.

“By statute, the program does not require hospitals to pass on the discounts to the patients they treat or limit provision of discounted drugs to patients who are uninsured. Therefore, providers can dispense discounted drugs to all their patients and keep the profits they make when they bill payers for the drugs.”

This loophole in federal law essentially allows hospitals to cobble up the savings on prescription drugs.

What Patients Can Do

What can patients do right now if they face a high prescription drug bill? WDIV ClickOnDetroit shares some helpful tips for patients as part of its consumer Help Me Hank segment.

Former Senate Majority Leader Bill Frist and former Rep. Bart Gordon, who co-chair the Bipartisan Policy Center’s Advancing Medical Innovation Initiative, identify ten key areas ready for bipartisan action in 2016. “Though we enter an increasingly political season in Washington,” the former Republican and former Democrat lawmakers write at The Hill, “policymakers can and should build on the considerable hard work that has been done to date and pass medical innovation legislation this year.”

This is an initiative that will benefit patients. We encourage efforts to take the politics out of health care issues and build consensus for the benefit of access and innovation.